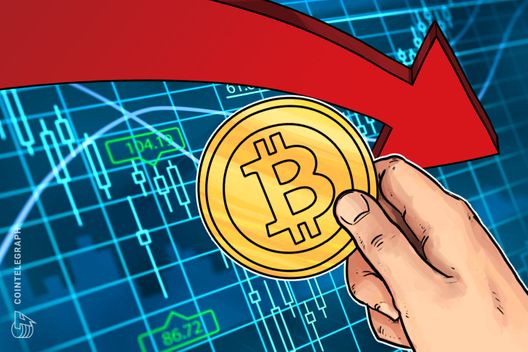 Tuesday, Dec. 11: crypto markets have continued moving in a downward trend after challenging a recovery attempt on Sunday, Dec. 9. Almost all of the top 20 coins have seen losses over the 24-hour period, with Bitcoin SV (BSV) down the most, seeing just over 6 percent losses.

Having failed to hold $3,500 support yesterday, Bitcoin (BTC) has briefly dropped below the $3,400 threshold earlier today. However, the intraday low $3,397 is still not the lowest point over the week, with the coin’s intraweek low around $3,280 on Dec. 7.

As of press time, Bitcoin is trading just above $3,400, down around 2 percent over the past 24 hours.

Recently, Cointelegraph reported on Bitcoin’s increased volatility, which has risen threefold on the month.

Bitcoin’s share of the crypto market, or dominance, currently amounts to 55.1 percent, seeing a considerably steady increase over the past six months.

Ripple (XRP), the second largest cryptocurrency by market cap, is down about 1 percent today, and trading at $0.29, having dropped below $0.30 for the first time since Sept. 17.

The third largest crypto Ethereum (ETH) is down just over 3 percent over the 24-hour period, its price dipping below the $90 threshold for the first time since May 2017. At press time, the altcoin is trading around $88.

Bitcoin SV, recently formed after a hard fork of Bitcoin Cash (BCH), is seeing the most losses among the top 20 crypto markets, with its price having declined over 6 percent as of press time. The coin is trading at $89.91 and ranks eighth in terms of market cap, while Bitcoin Cash is ranked sixth and trading at around $101.

While crypto markets have continued seeing a decline since Sunday, Dec. 9, the former chief economist of the International Monetary Fund (IMF) has recently argued that Bitcoin should be considered a “lottery ticket.” Kenneth Rogoff, who is currently a Professor of Economics and Public Policy at Harvard University, predicted that Bitcoin’s price in the long-term is “more likely to be $100 than $100,000.”

Following multiple reports about the collapse of the crypto mining sector caused by the recent market crash, Cointelegraph has reported today that to date, only two miners that use Application-Specific Integrated Circuit (ASIC) chips and are geared to mine coins that are based on cryptographic hash function “SHA-256” –– such as Bitcoin and Bitcoin Cash ––  are still profitable for mining.

Earlier today, U.S.-based crypto exchange Gemini, created by the Winklevoss brothers, has launched a mobile crypto trading app. Yesterday, Cameron Winklevoss tweeted on the current state of crypto market, noting that in 2018 “everyone wanted to be in crypto,” while who wants to be in crypto in 2019 remains to be seen.