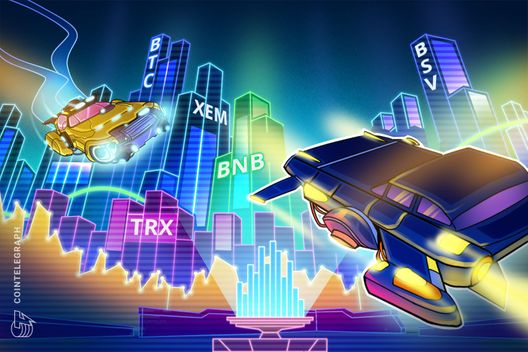 In a bear market, the sentiment is most bearish right at the bottom of the trend. The entire heard says to sell. Short sellers laugh away to the bank and many analysts call for a further fall. With majority of the news being negative, it sounds logically correct.

However, when the downtrend enters a capitulation, it usually signals a bottom. Going against the trend, at such times, turns out to be a profitable decision. A prolonged downtrend is also a good time to sell out the positions that don’t have sound fundamentals and shift into cryptocurrencies that have a bright future.

Though the total market capitalization of cryptocurrencies has plunged about 87 percent from its highs, Bitcoin has managed to maintain its dominance above the 50 mark throughout the fall. This shows that its leadership position remains intact and we have to watch its price action closely to forecast direction for the entire crypto markets.

Bitcoin SV, born out of the Bitcoin Cash hard fork, is the only one among the top virtual currencies that has been in the green in the past seven days. Its outperformance helped it to overtake Bitcoin Cash in terms of market capitalization for a short period of time on Dec. 7.

Currently, both the cryptocurrencies are trading with market capitalizations that are relatively close to each other.

On the contrary, if the price breaks down of the range, a retest of the lows is probable. Trading inside the range can be volatile; therefore, we suggest waiting for a breakout of the range for initiating any long positions.

NEM and three other blockchain firms have come together to form a lobbying group in Europe to “create a unified voice for the blockchain industry at the European level.” NEM has been one of the stronger performers in this fall. Let’s see if it is showing any bottoming formations.

While most other top digital currencies are making new year-to-date lows, the XEM/USD pair has not declined much in the past few days. Even after breaking down of the range $0.13125258-$0.07790717, the bears have not been able to push prices lower. This suggests demand on dips.

If the price climbs back into the range and sustains it for three days, it will confirm that the markets have rejected the lower levels. Traders can initiate long positions above the 50-day SMA and expect a move back towards the top of the range.

On the other hand, if the digital currency turns down from the 20-day EMA and breaks down of $0.06155741, the fall can extend to $0.05. We expect a decisive breakout or breakdown within the next few days.

TRON CEO Justin Sun announced that Tron has joined Blockfolio Signal beta, which is a popular mobile cryptocurrency portfolio tracking and management network. Justin Sun’s war of words with its competitors, Ethereum and EOS, also continues. He said that his company will create a fund to “rescue” the developers of Ethereum and EOS, following a “collapse” of their platforms.

If the bulls scale the overhead resistance of the 20-day EMA, a rally to $0.0183 is probable. We expect the TRX/USD pair to remain range bound for a few days before making the next decisive move.

A breakout above $0.0183 will signal strength and can be traded on the long side.

Binance Coin made a large move during the week on the back of the announcement regarding upcoming release of Binance Chain. Binance CEO Changpeng Zhao (CZ) hopes to host millions of coins and thousands of blockchains on the platform in the future.

The upcoming launch of Binance’s decentralized exchange (DEX) also boosted sentiment. The constant complain of the naysayers has been a lack of mainstream usability. However, with a partnership with Tripio, Binance has offered the opportunity of using BNB at 450,000 hotel locations. Though the fundamentals are improving, let’s see what the chart forecasts.

The BNB/USD pair gave up a lot of ground between Nov. 14 to Nov. 25. During this period, the price dropped by about 53 percent. Thereafter, the bulls attempted to bounce from the critical support zone of $4.8355125-$4.5200621. The pullback broke out of the 20-day EMA, which was trending down but the bulls could not sustain the higher levels.

The digital currency turned around and slumped sharply on Dec. 6 and 7, resulting in a new low. The bears are attempting to resume the downtrend, while the bulls are trying to pull back from the current levels. The RSI is showing a positive divergence, which is a bullish sign. We anticipate a trend change if the price breaks out of $7 levels. Traders should wait for a new buy setup to form before investing.

Though Bitcoin is the fifth best performer in the past seven days, it has continued to make new year-to-date lows. The SEC postponing the decision on the Bitcoin ETF did not go well with investors. The experts are divided whether the digital currency will slip further or will it bounce off the current levels. Let’s see what the charts forecast.

The BTC/USD pair gathered momentum on the downside after it broke below the critical support of $5,900. The RSI on the weekly chart has slipped into the oversold territory for the first time since early 2015. The previous dip into the oversold zone had proven to be a good buying point, as the markets then entered a prolonged bull phase.

The $3,000-$3,500 zone had previously acted as a support in mid-September 2017. Therefore, we anticipate a bounce from this zone this time too. If successful, we expect a retest of the breakdown levels of $5,900.  Hence, we have been on the lookout to buy.

On the other hand, if the bears break below the support zone, the next major support is way lower at $2,000.