G-20 Summit Results: Crypto Is Important for Global Economy, Needs to Be Regulated and Taxed

G-20 Summit Results: Crypto Is Important for Global Economy, Needs to Be Regulated and Taxed G-20 countries are positive about non-bank financial institutions and the technology, but call for more AML scrutiny and international tax framework — here are results of the recent summit

Members of the Group of 20 (G-20), an international forum for the governments and central banks of countries with developed and developing economies, addressed cryptocurrencies in their recent declaration on sustainable development of the global economy.

Declaration summary: Crypto is important, but it needs to be put under scrutiny and tax regulations

On Dec. 1, the G-20 declaration titled “Building Consensus for Fair and Sustainable Development” was published on the official website of the Council of the European Union and the European Council. The document summarized the 13th gathering of G-20 nations that took place on Nov. 30 and Dec. 1 in Buenos Aires, Argentina.

The declaration addressed crypto regulation, albeit briefly: Cryptocurrencies are mentioned just once there, in the broader context of an “open and resilient financial system” that “is crucial to support sustainable growth.”

While recognizing the importance of the cryptocurrency industry for the global economy, the G-20 also noted that it will introduce Anti-Money Laundering (AML) and anti-terrorist measures per standards of Financial Action Task Force (FATF), an intergovernmental body formed to fight money laundering and terrorist financing:

“We will regulate crypto-assets for anti-money laundering and countering the financing of terrorism in line with FATF standards and we will consider other responses as needed.”

Further, in the same segment of the declaration, G-20 participants expressed a positive stance on non-bank financial institutions, pointing out the potential advantages of technology in the financial sector, given that the tech innovators are managing associated risks:

“We look forward to continued progress on achieving resilient non-bank financial intermediation. We will step up efforts to ensure that the potential benefits of technology in the financial sector can be realized while risks are mitigated.”

There is more crypto-related news coming from the international summit, however. On Dec. 2, Japanese news outlet Jiji reported that the G-20 countries have also called for the international taxation of cryptocurrency. According to the publication, the final text of a document cooperatively prepared by G-20 leaders outlines “a taxation system for cross-border electronic payment services.”

The article specifies that — under current laws — foreign companies that do “not have a factory or other base in Japan” cannot be taxed by the local government, while the G-20 leaders seek to “build a taxation system for cross-border electronic services.”

The Japanese news outlet also mentioned an estimated deadline for the system, saying that the final version of regulations, after considering proposals from each member state, is expected to be introduced by 2020. The issue will reportedly be discussed next year, when Japan will become the host of the summit and Japanese Prime Minister Shinzō Abe will take the position of G-20’s president.

G-20 officials have previously maintained a ‘hands-off’ approach on crypto. In March 2018, after a call from France’s finance minister, Bruno Le Maire, the G-20 participants concluded the first public debate on virtual currencies.

The meeting resulted with a “firm” July deadline that had been put forward for “very specific recommendations” on how to regulate cryptocurrencies globally, despite the Financial Stability Board (FSB) — the group which coordinates financial regulation for the G-20 economies — resisting calls from some G-20 members to discuss regulating cryptocurrencies at the conference.

Moreover, many of the G-20 participants decided that cryptocurrencies needed to be examined further before making a concrete regulatory move, albeit some countries including Brazil stated that they won’t be following the G-20 recommendations.

Nevertheless, the G-20 members agreed that the FATF would have its standards applied to the cryptocurrency markets in the respective countries, a position they recently reiterated in Buenos Aires:

„We commit to implement the FATF standards as they apply to crypto-assets, look forward to the FATF review of those standards, and call on the FATF to advance global implementation. We call on international standard-setting bodies (SSBs) to continue their monitoring of crypto-assets and their risks, according to their mandates, and assess multilateral responses as needed.“

In July, a summary of provisional decisions made by the dedicated Finance Ministers & Central Bank Governors said that “technological innovations, including those underlying cryptoassets [sic], can deliver significant benefits to the financial system and the broader economy.” Nevertheless, the document also listed various related problems, including tax evasion and AML concerns:

Still, the actual recommendations for how to approach the cryptocurrency sphere at the international level were not presented, and the deadline was pushed to October 2018:

“[W]e ask the FATF to clarify in October 2018 how its standards apply to crypto-assets,” the summary read. It is unclear if those recommendations have been presented to date, as there has been no information from the G-20 regarding that issue.

On Oct. 22, as the G-20 remained silent, Jeremy Allaire, the CEO of the Goldman Sachs-backed crypto investment app Circle, stated that crypto-related regulatory matters have to be addressed “at the G20 level.” Prior to that, on Oct. 19, the FATF said that by June 2019, jurisdictions will be obliged to license or regulate cryptocurrency exchanges and some firms providing encrypted wallets internationally as part of AML and anti-terrorism procedures.

In separate news regarding international adoption and regulation of crypto technology, on Dec. 4, seven southern EU countries — including France, Italy, Spain and Malta — formed an alliance called the “Mediterranean seven” with the aim to promote the use of Distributed Ledger Technology (DLT) among governments, as per Financial Times. The EU, as well as Italy and France, are members of the G-20 alliance.

More specifically, the EU countries have reportedly signed a declaration stating that areas like “education, transport, mobility, shipping, land registry, customs, company registry, and healthcare” can be “transformed” and boosted with the use of DLT.

“This can result not only in the enhancement of e-government services but also increased transparency and reduced administrative burdens, better customs collection and better access to public information,” the declaration reportedly states. 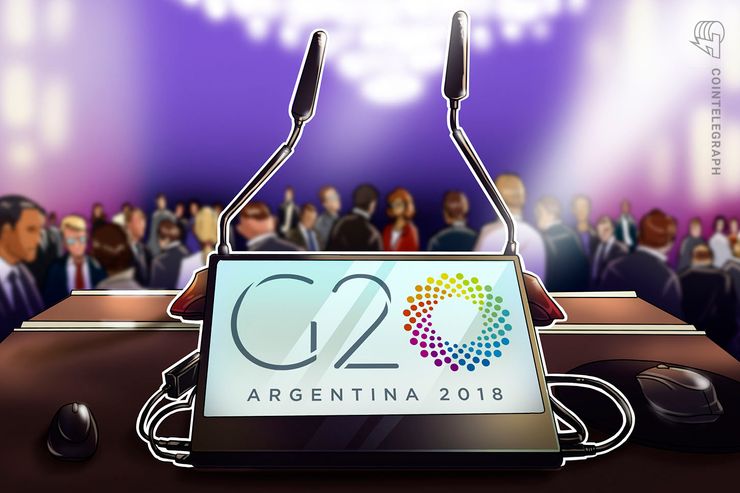 G-20 countries are positive about non-bank financial institutions and the technology, but call for more AML scrutiny and international tax framework — here are results of the recent summit