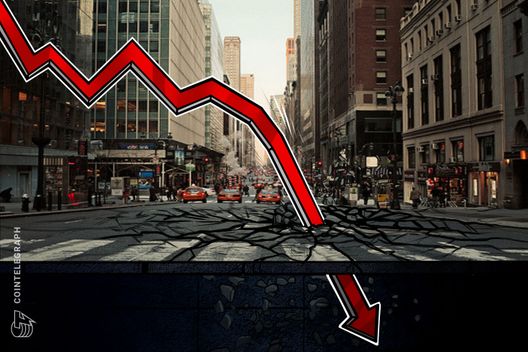 Bitcoin today briefly dipped back down below $4,000 as major cryptos are seeing losses of within a 4 and 10 percent range

Friday, Nov. 30 — After a short-lived spike earlier this week, the crypto markets are today back in the red, with virtually all of the top 20 cryptocurrencies seeing losses within a 4 and 10 percent range, as data from Coin360 shows. 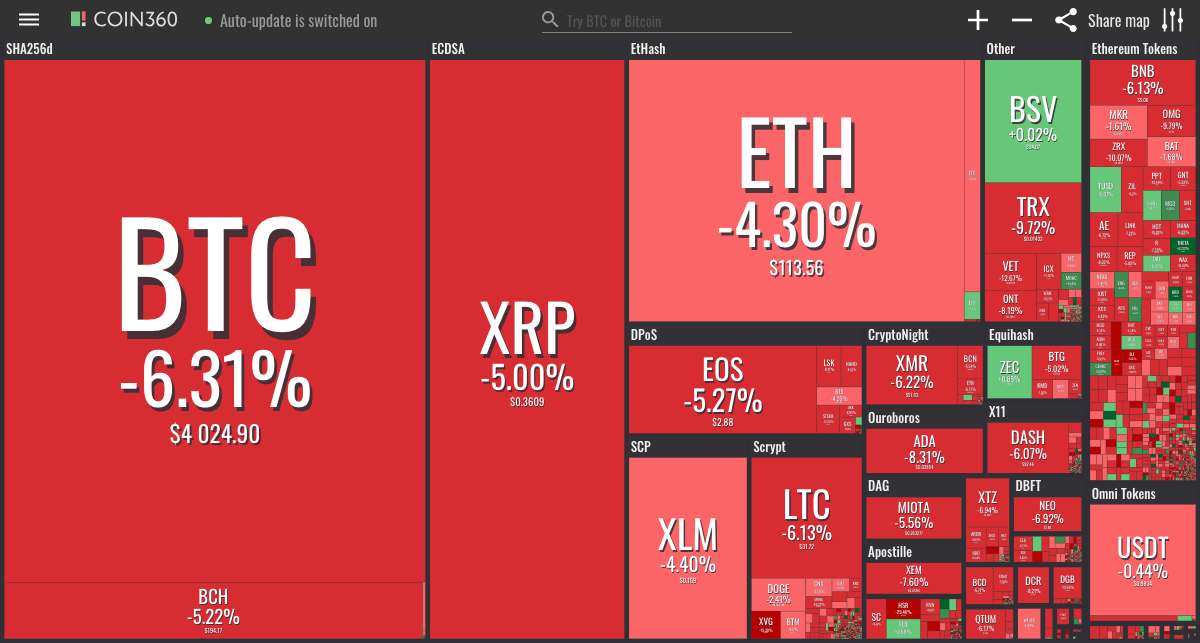 On the week, Bitcoin is around 6 percent in the red; monthly losses are at a stark 36.3 percent. 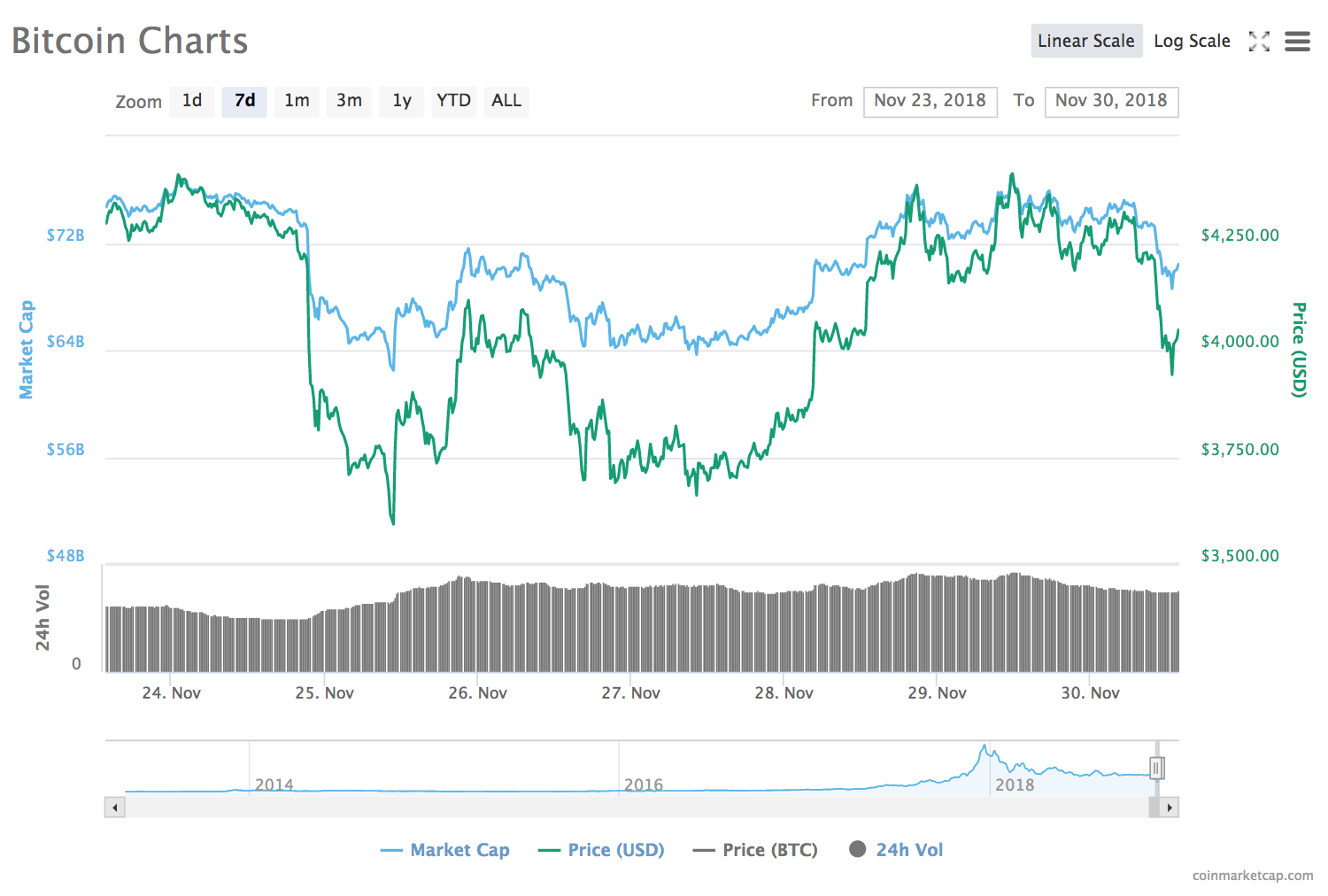 Second-largest ranked crypto asset, Ripple (XRP), is down 5.5 percent on the day, trading at $0.35 to press time. While its market share has dropped down to $14.45 billion, it continues to hold its margin ahead of Ethereum (ETH), now ranked 3rd largest crypto, with a market cap of just below $11.7 billion.

On the week, Ripple is 12 percent in the red, with monthly losses above 19 percent. 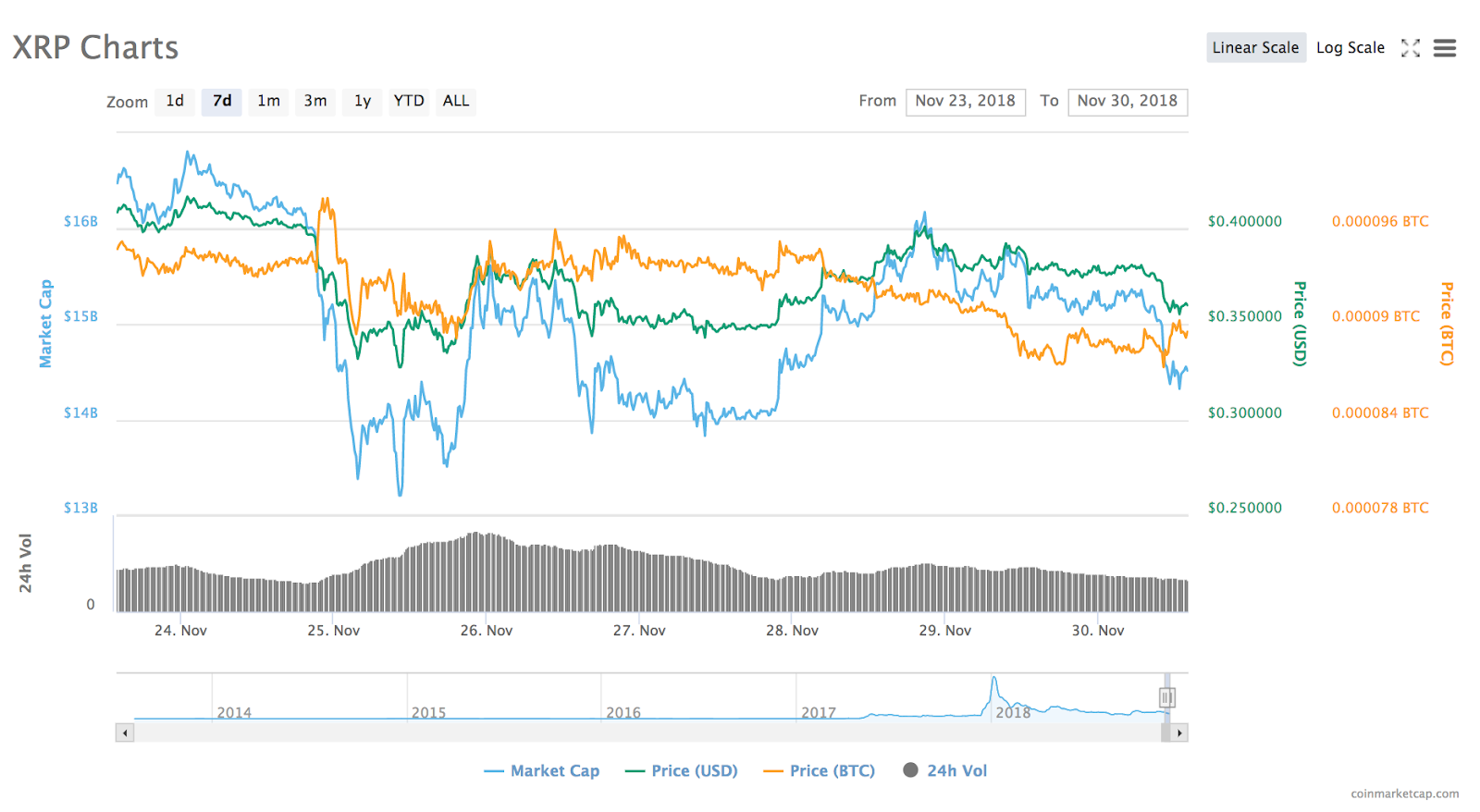 Ethereum (ETH) is down a round 5 percent on the day to trade at $112.9. The asset veered close to double digits during a market tumble Nov. 25, and has since recovered, briefly hitting $125 Nov. 28 — yet without sustaining significant gains. The altcoin’s decline on the week has brought it to around 7.6 percent in the red; monthly losses are pushing 43 percent. 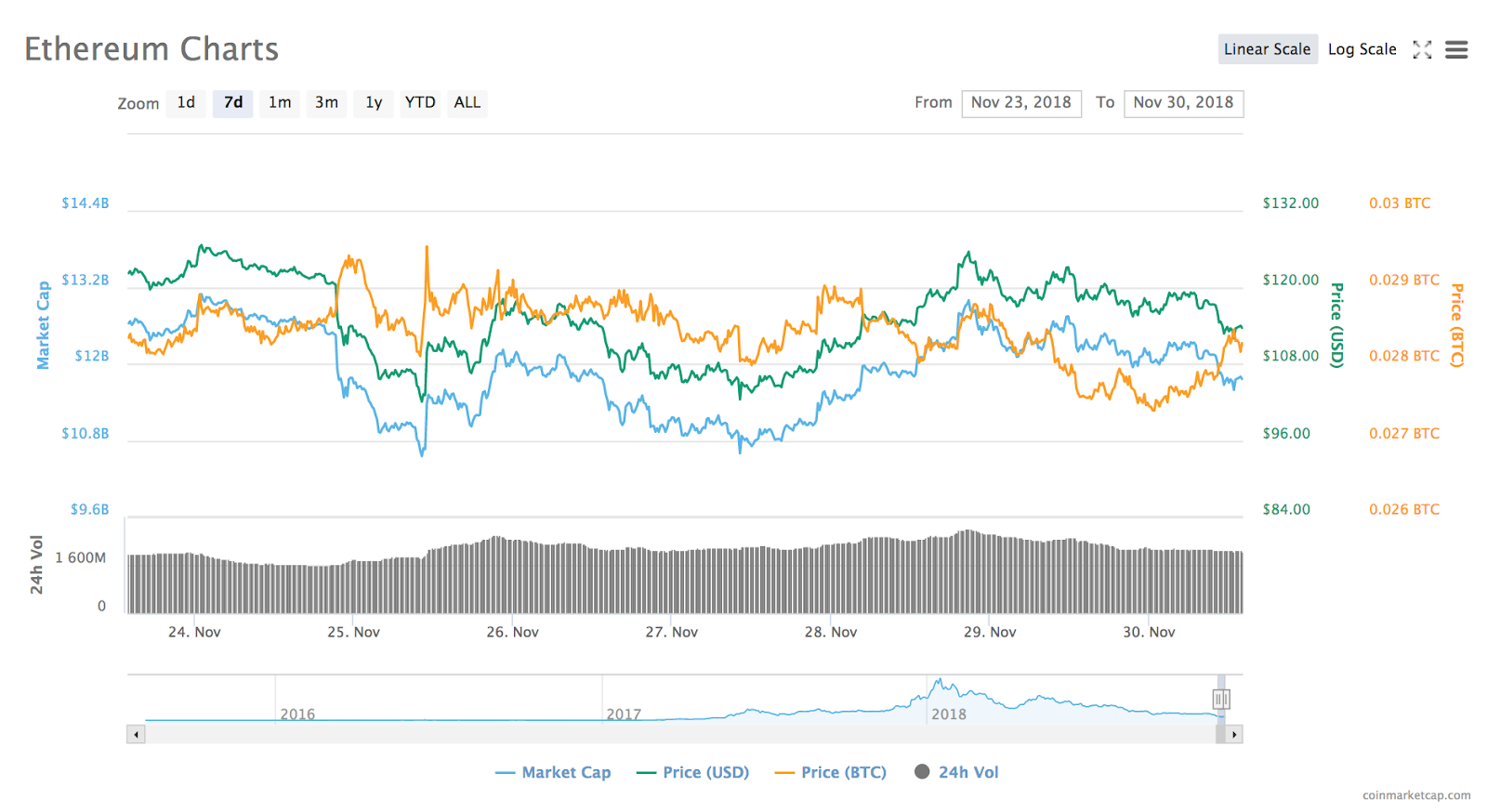 Most of the remaining top ten coins on CoinMarketCap are seeing losses of between 4 and 10 percent, with the notable exception of newly-forked Bitcoin SV (BSV) (from the Bitcoin Cash (BCH) split), which has decoupled from the wider market to seal a 2.6 percent gain on the day, trading at $96.35.

The remaining coins in the top twenty by market cap are all red, with the exception of privacy-focused alt, Zcash (ZEC), ranked 19th, which is up 1.74 percent at $82.05. Zcash’s spike is likely due to major U.S. cryptocurrency exchange Coinbase announcing its launch of support for the asset on its Coinbase Pro platform yesterday, Nov. 29.

Total market capitalization of all cryptocurrencies is around $130.4 billion as of press time, up  almost $16 billion from an intraweek low of $114.6 billion Nov. 25. 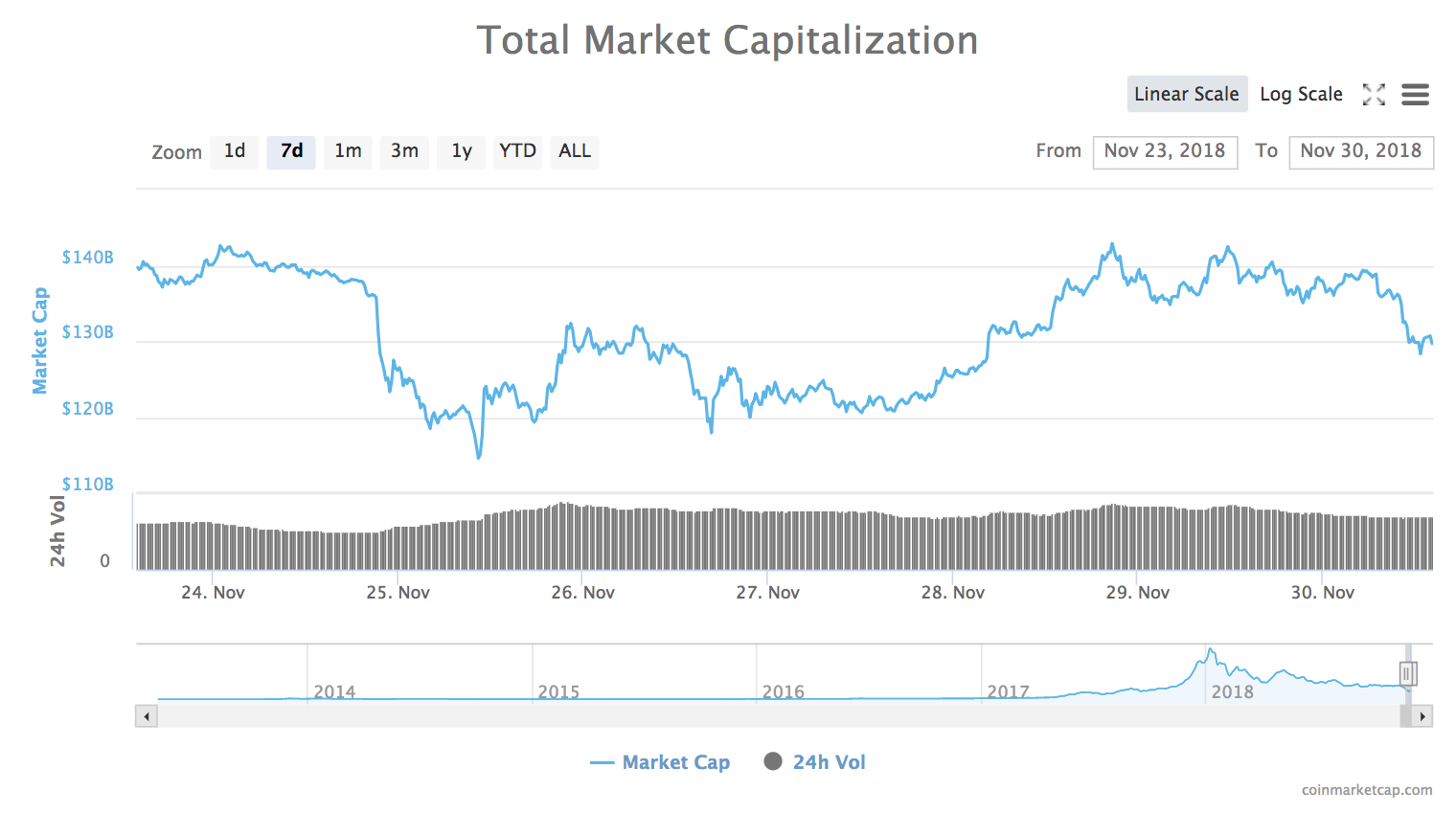 BlockShow Asia 2018 has been a barometer of both the crypto sector’s dynamic development and of recent market sentiment, with BlockShow CEO Addy Creeze quipping that “bear market” and “crypto winter” were among the most-heard words at the event.

Bitcoin today briefly dipped back down below $4,000 as major cryptos are seeing losses of within a 4 and 10 percent range