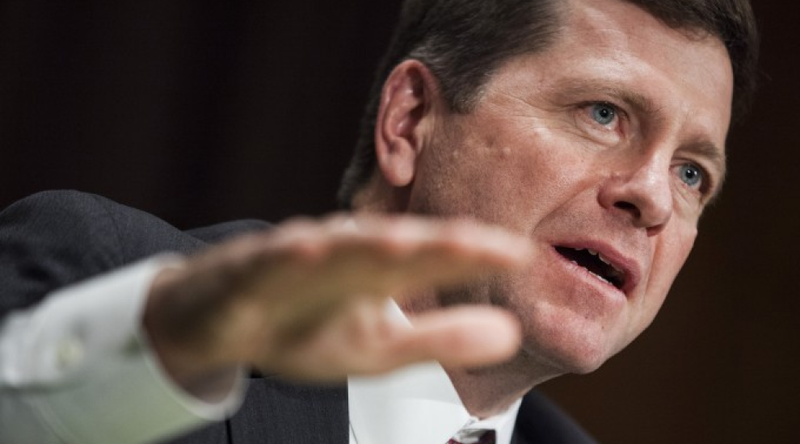 Speaking at the ongoing CoinDesk’s Consensus Invest conference in New York, U.S. Securities and Exchange Commission (SEC) Chairman Jay Clayton spoke on why his agency hasn’t yet approved a bitcoin exchange traded fund (ETF). But the rationale behind his words is nothing his crypto-friendly audience hasn’t heard before.

Clayton explained that his agency might not approve a bitcoin ETF anytime soon as the agency’s issues are yet to be addressed by market operators. Clayton singled out theft and manipulation of cryptocurrencies as two issues that need to be sorted out before the commission can give its blessings to an ETF, something that prior rejection orders have repeated ad infinitum.

In these rejection orders, the SEC claims that each applicant has failed “to demonstrate that its proposal is consistent with the requirements of the Exchange Act Section 6(b)(5), in particular the requirement that its rules be designed to prevent fraudulent and manipulative acts and practices,” continuing to say that “novel systems intrinsic to this new market provide unique additional protections that are unavailable in traditional commodity markets,” namely “traditional means of identifying and deterring fraud and manipulation.”

These “traditional means” are surveillance sharing agreements, something the rejection orders stress as one of the avenues through which a product might win approval. In his own talk, Chairman Clayton opined that this surveillance, a system used by the likes of Nasdaq to investigate manipulative trading activities, could keep tabs on manipulative practices and ensure fair pricing.

He believes investors want certain upgrades in fraud protection and market surveillance, both of which “[do] not exist currently in all of the exchange venues where digital currencies trade.”

Clayton also reiterated the crux of the SEC’s rejections in his talk; namely, that the underlying market is too fraught with manipulation to allow a mainstream investing product, as this would expose investors to unmanaged risks.

“What investors expect is that the trading in that commodity that’s underlying the ETF is trading that makes sense, is free from the risk or significant risk of manipulation. Those kinds of safeguards don’t exist in many of the markets where digital currencies trade,” the SEC chairman explained in a panel session moderated by Silver Lake Partner’s Glenn Hutchins.

Market manipulation aside, the issue of custody is another obstacle that has kept ETFs from seeing the light of day. The custody of digital assets needs to improve, considering the wave of hacks and crypto thefts that have occurred in 2018, Clayton asserted.

“We’ve seen some thefts around digital assets that make you scratch your head. We care that the assets underlying that ETF have good custody, and that they’re not going to disappear.”

On the issue of custody, it’s been a flurry of activity from both crypto and financial institutions alike. Coinbase launched a custody solution as far back as August 2018, while Fidelity, through its crypto arm Fidelity Digital Assets, started its enterprise-grade custody solution in October. Not to be left behind, American multinational investment bank Citigroup announced plans to offer crypto custody solutions in September. Gemini, Ledger and ItBit are also working on floating a similar service. With the number of options that abound, the SEC chair believes there is room for improvement.

So far in 2018, the agency has rejected the ETF application from the Winklevoss Twins, along with nine others that, after rejection at the staffing level, are currently being reviewed by the Commission itself. It has also postponed its decision on the VanEck SolidX ETF case till February 2019 at the latest. Even in spite of this postponement (and the SEC’s revolving door of rejections and cautious stance against a bitcoin ETF), VanEck’s director of Digital Asset Strategy, Gabor Gurbacs, is confident that VanEck’s filing has checked all of the SEC’s boxes.